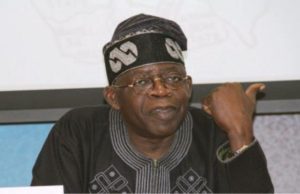 The National Leader of the All Progressives Congress (APC) has commended Acting President, Yemi Osinbajo for his intervention in the blockade of the National Assembly complex.

Tinubu gave the commendation while addressing party members at the state secretariat of the party on Tuesday.

He said the response of Osinbajo in sacking the Director-General of the Department State Security Services (DSS) helped to douse the tension created by the blockade.

Describing the blockade as a threat to democracy, the APC chieftain said Osinbajo saved the country an embarrassment with his intervention.

“”We thank the Vice -President for the wonderful job he has been doing in the absence of President Muhammadu Buhari.

“We particularly thanked him in the way he intervened on the National Assembly blockade.

“Vice President Osinbajo saved the country from embarrassment.We thank him, we will continue to support him,” NAN quoted him as saying.