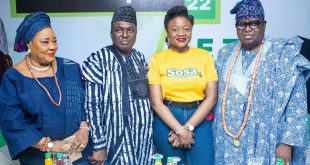 The National Assembly is set to receive the 2020 Appropriation Bill, it was learnt on Saturday.

Findings showed that the Appropriation Committees of the two chambers are also in top gear to receive the fiscal document when it is referred to them.

A member of the Senate Appropriation Committee told our reporter that “all hands are on deck to ensure that the budget is not unduly delayed when it is presented by President Muhammadu Buhari.

Buhari had in a letter to the Senate President, informed the Senate that he would present the 2020 Appropriation Bill to a joint session of the National Assembly on Tuesday, October 8, 2019.

This is the first time the Appropriation Bill would be presented to a joint session of the National Assembly in October for consideration and passage.

Senate President, Senator Ahmad Lawan, has been consistent in his assurance that the 2020 budget would be passed before the National Assembly goes on its Christmas recess if the Appropriation Bill is submitted in September or first week of October.

The presentation of the budget is coming on the heels of the consideration and passage of the 2020 Medium Term Expenditure Framework and Fiscal Strategy Paper (MTEF/FSP) by the Senate.

Chairman Senate Committee on Media and Public Affairs, Senator Adedayo Adeyeye, had informed Senate Correspondent on Thursday that the President would present 2020 Appropriation Bill on Tuesday.

He also underscored the importance of the budget presentation, saying it was in line with the legislative agenda of the Senate and the desire of the President of the Senate to change the budget cycle.

“On Tuesday by 2pm, the President of the Federal Republic of Nigeria, President Muhammadu Buhari, will address a joint sitting of the National Assembly on the 2020 national budget.

“On Tuesday, we will still have our plenary but we will adjourn and move to the House of Representatives to receive the President and welcome his address.

“I think this is in tandem with the 9th Senate’s Legislative Agenda and part of the Senate President’s manifestoes when he was running for this office to change the budget circle in Nigeria and now the President has taken a cue and we want to commend him.

“He is going to present the budget by Tuesday next week, which is unprecedented in the last few years,” Adeyeye had said.

The Senate’s spokesman added that the National Assembly is determined to pass the 2020 budget before its Christmas break.

“In fact, since the beginning of this democracy, the budgets have been presented in December but this is the first time we are going to receive the budget by early October.

“I can assure you that with the determination and the zeal I see in the Senate and even the House of Reps, that budget would be passed before we go in Christmas recess so that implementation can take place between January to December.”

Findings by The Nation show that there is a palpable air of anxiety among the lawmakers as they prepare to receive the President.

Many senators who spoke in confidence said Buhari’s expected presence at a joint session of the 9th National Assembly would further cement the existing collaboration and spirit of understanding between the executive and the legislature.

President of the Senate has given a hint of this on Thursday before senators debated the MTEF document considered in one week by its Committee on Finance.

Lawan said: “I must thank the leadership of the Finance Committee, Senator Solomon Adeola Olamilekan, for a very wonderful job. I know that the committee, since we referred the MTEF for them to work on, they have literally moved into the National Assembly.”

When contacted by our reporter, a former Senate Leader, Senator Mohammed Ali Ndume, said: “This is a very welcomed development and I know that the 9th Senate is determined to give whatever support that is necessary in order to make the budget process more effective.”

“We normally get feelings of the people. Right now what the people want is for us to cooperate with the executive so that it would provide the services that they need.”

@@dailyrecordng
Previous Governors will pay 9 per cent, says Fayemi
Next APC, Buhari under fire over insults on Jonathan