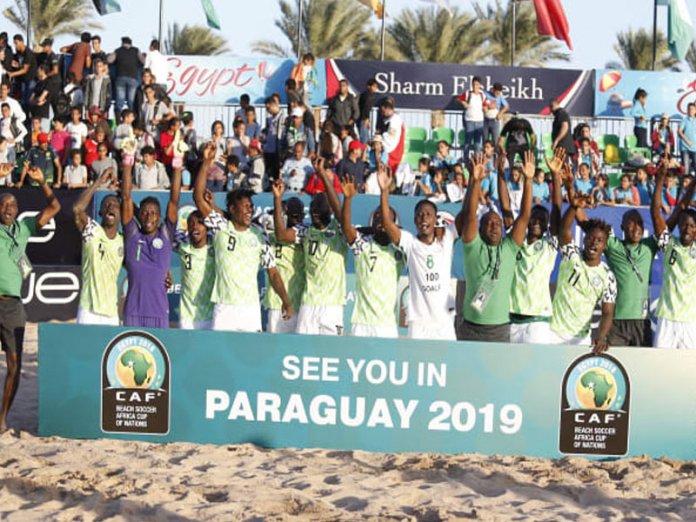 Players and officials of the beach soccer national team, Supersand Eagles, will jet out of the country on Friday to Paraguay for this year’s FIFA Beach Soccer World Cup finals.

The two-time African champions picked a ticket for the 10th edition of the global finals after finishing second behind Senegal at the Beach Soccer Africa Cup of Nations staged in Egypt in December last year.

This year’s FIFA Beach Soccer World Cup will hold between 21st November and 1st December in Asuncion, capital of Paraguay. Match venue is the ‘Los Pynandi’ World Cup Stadium, named after the Paraguayan national beach soccer team and located at the headquarters of the Paraguayan Olympic Committee in Greater Asuncion.

“We are travelling early to Asuncion in order to participate in an eight-nation pre-competition tournament that will take place in Asuncion, 12th – 16th November. After the tournament, the team will continue intensive training ahead of our first match against Portugal on 22nd November,” Team Administrator, Sunday Okayi, announced yesterday.

The pre-competition tournament will involve Oman, Tahiti, Paraguay, Nigeria, Belarus, United Arab Emirates, Senegal and one other team to be confirmed.

Host nation Paraguay will tackle Japan in the tournament opening game on 21st November. After their first game against Portugal on 22nd November, the Supersand Eagles take to the beach against Oman on 24th November and then against Brazil two days later.