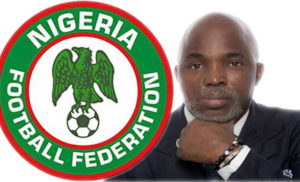 Festus Keyamo, who is counsel to the President of the Nigeria Football Federation Amaju Pinnick has issued a ‘clear the air’ statement, debunking reports that there was a standing order of the Supreme Court that restrained his client from acting as the defacto President of the NFF.
In a statement titled “NO SUPREME COURT ORDER RESTRAINING AMAJU PINNICK FROM ACTING AS PRESIDENT…” Keyamo said the impression that there was a standing order of the Supreme Court which restricts Amaju Pinnick from functioning was not only ill-informed but also mischievous. Keyamo insisted, “there is no Supreme Court Order or any other subsisting order restraining Amaju Pinnick from acting as President of the Nigeria Football Federation or installing Chris Giwa as President of the NFF.”
He challenged whoever has the Supreme Court judgment to publish it.“We hereby challenge anybody who disputes this to publish the Supreme Court Judgment or Order where the names of Amaju Pinnick or Chris Giwa were ever mentioned in any portion of the judgment or as even parties to the case.
“The fact is that the court processes filed in the Supreme Court matter do not bear their names as parties to the suit whatsoever.”
Keyamo raised another fundamental question: “If Giwa and his team had a Supreme Court Order granting him the right to the NFF Presidency, why would they have to go back to the Federal High Court to surreptitiously procure a fresh Ex Parte Order dated June 5, 2018 for the same purpose and containing reliefs totally different from the “previous” orders of 19th day of September 2014?”
Share