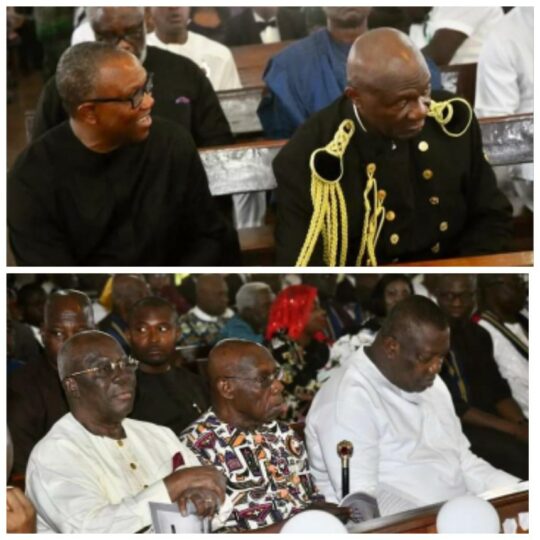 Obasanjo spoke on Sunday during a Church service to mark the 70th Birthday and Colloquium of Nwodo, former Minister of Information and former President-General of Ohaneze Ndigbo Worldwide, at St. Mulumba’s Catholic Church, New Haven, Enugu.

He noted that “the age of a man does not matter much” as to his achievements and contributions to humanity, adding: “The life of a man really begins at 70”.

“It is not the number of years you spend here on Earth, the most important thing is your positive contributions to humanity and God,” he said.

He prayed to God to continue to guide the celebrant as he continues to make positive contributions to the development and unity of the country.

Chief Ayo Adebanjo, leader of Afenifere, also extolled the uncommon trait of Nwodo to build bridges and friendships across the country.

Adebanjo said that Nwodo stood out for peace and equity of all parts and ethnicity of the country, adding he had done that through words and vivid actions.

“I congratulate him for his love for humanity and the progress of everybody he comes across. We thank God for his life,” he said.

The Obi of Onitsha, Igwe Nnaemeka Achebe, said that Nwodo remained a man of many parts that had contributed much in various fields of human endeavour and community development.

Achebe described him as `a great nation builder and an outstanding bridge builder’ who had continued to see all Nigerians as one and the same family.

“I pray that God will continue to grant him good health and drive to accomplish all He had set out to use Nwodo to achieve for our great nation,” he said.

Earlier, in his homily, Most Rev. Geoffrey Onah, the Catholic Bishop of Nsukka Diocese, noted that God at no time did not limit the age of men, but “it is our sinful nature that brought us to this limitation”.

He said: “However, long years do not make life honourable but wisdom and fear of God.

“Age is about your investment in doing good, extending positive tidings to others and spreading your daily work towards the common good of all”.

Onah congratulated Nwodo and urged other leaders in the country to emulate his fine virtues of patients, meekness, accommodation of others and love for humanity.

In a vote of thanks, Nwodo thanked those who came from various parts of the country to grace the thanksgiving service, attend the colloquium and launch his book – “John Nnia Nwodo: Great Speeches”.

He said that his 70th birthday was coming at a time when the country was at a crossroads of change and value re-orientation towards national progress and true unity.

“I prayed that God, in His infinite mercy, would grant people who came from all over the country to rejoice with me, more years in their lives and positive developments too,” he said.

Highlights of the service were the special thanksgiving by the Nwodo family on behalf of Chief Nnia Nwodo and a Special Papal Blessing from Pope Francis on Nwodo.

@@dailyrecordng
Previous 2023: APC must unite for electoral victory -Buhari
Next Ronaldo: The biggest dream of my career is over