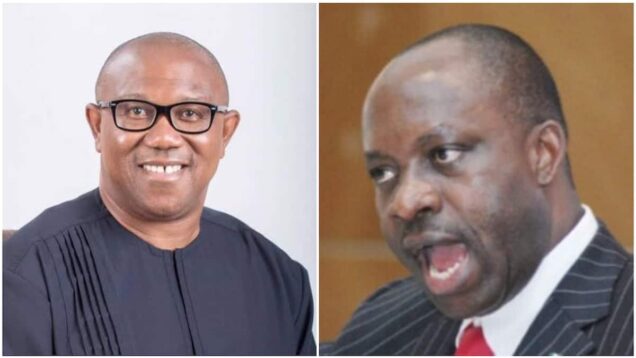 Peter Obi never allowed Labour Party to campaign freely in Anambra when he was governor of the state, says Prof. Charles Soludo.
Soludo, current Anambra State Governor in an interview on Channels TV’s Politics Today, was reacting to complain and pettiness from Obi’s camp that their billboards were being pulled down in Anambra State by his government.

He said he had allowed Obi to use the government house for his campaign without charging him a penny on two occasions.

He said: “I have allowed the Labour Party’s candidate to use government house for his campaign without charging him a penny. Nobody has done that, he did not do that when he was governor, he didn’t even allow Labour Party, where he is now, to freely campaign in Anambra.

“He denied them even the venue they paid for but I have allowed him to use government house twice free of charge. They were at Onitsha the other day and had their campaigns, they have their billboards all over the place, but the point is when you fail to play by the rule.

“You put up bill boards and you don’t pay anything, of course the signage agency will come after you. Even yesterday I had a complain, they pulled down the board of APGA candidate because he hasn’t paid.

Soludo added: “We have granted their presidential candidate to use government house free twice. The second time he had it, I had to cancel a pre-meeting event I had at that same venue. I had to relocate them to come and I used canopies at the governor’s lodge so that he could have the whole place to himself, that is how tolerant we are. I have lots of faults but being petty is not one of them.”
Share