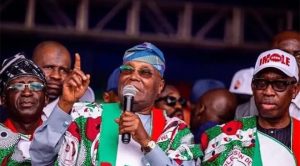 The presidential candidate of the Peoples Democratic Party PDP, Atiku Abubakar on Thursday made last minute effort to drum up support for Demola Adeleke, the governorship candidate of the party in Osun state.

The election will be held in  less than 24 hours.

Senator Adeleke is squaring up with Governor Gboyega Isiaka, the incumbent and governorship candidate of the All Progressives Congress, APC in a make or mar election on Saturday.

For days, the PDP presidential candidate has received scathing criticisms from some members of his party for not galvanizing enough support for his party ahead the election.

Atiku, who’s currently grappling with the problems from the fallout of his selection of Ifeanyi Okowa as his running mate, had rushed down from a trip to the United Kingdom and UAE to lead the campaign.

stayed away during the Ekiti governorship election.

By leading the campaign, analysts say PDP, is not leaving any stone unturned to take over power from APC which has ruled the state for eight years, uninterrupted.

In his remarks, Atiku appealed to electorate in the state to vote for Adeleke, he also urged them to “protect their votes from being stolen.”

“Do not allow them to steal your votes like they did in 2018.

“Osun is a PDP state and I appeal to you to vote for the party and safeguard your votes,” Atiku said.

Also in his remarks, Ayu also appealed to electorate to vote for the party on Saturday.

He said, ”there is darkness in Osun. We want light and that is why we want you to vote for PDP and Adeleke on Saturday”.

Governor Aminu Tambuwal of  Sokoto state  also urged the electorate to vote PDP for the restoration of good governance.

He said that a vote for PDP on Saturday would bring progress and prosperity in the state.

On his part, Sambo urged registered voters to vote for PDP on Saturday.

The Caretaker Chairman of the party in the state, Akindele Adekunle, also urged the electorate to vote for the party.“Osun people have decided to vote for Ademola Adeleke. Vote for prosperity, vote for PDP,” he said.

In his remarks, Adeleke  commended the party members for coming out en masse for the campaign.He said a vote for him and PDP was a vote for progress.

Adeleke said if elected, he would ensure prompt payment of salaries, pension and also give financial  autonomy to local governments.

The high point of the campaign is the performance of Music Superstar, David Adeleke aka Davido who added colours to the event.