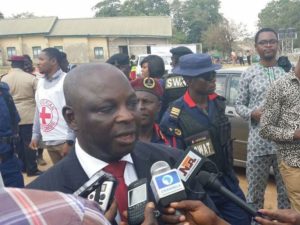 The Presidential Committee on Victim Support Fund has set aside N700 million to rebuild institutions destroyed in the perennial attacks by suspected herdsmen in Benue State.
This was disclosed monday by the Executive Director of the Fund, Prof. Sunday Ochoche in Gbajimba, the headquarters of Guma Local Government Area (LGA) of the state during the flag-off of the reconstruction of public infrastructure destroyed by herdsmen.

The executive secretary said the committee would be rebuilding public institutions in the three LGAs of the state – Guma, Logo and Agatu, respectively.
He also hinted that 28 public institutions would be rebuilt, adding that 23 of them were schools, while five were health clinics.
He assured the people that the projects would be completed within three months and according to specifications given the committee by the state government.
In his speech, the Benue State Governor, Samuel Ortom had appealed to the committee to rebuild the clinics and also equip them while the state government would provide drugs.

Represented by his Deputy, Benson Abonu, Ortom urged the people to make maximum use of the clinics and refrain from self medication.
He commended the committee for its quick response to his request, stressing that it risked the lives of its officials by visiting the affected areas even when the killings were at its peak.