Revealed: How Akpabio, Omo-Agege fell out over NDDC board appointments 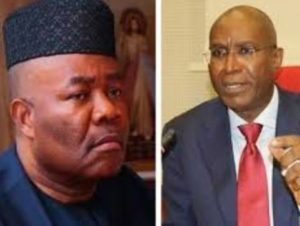 IT has been revealed that the SMS war between the Deputy Senate President, Senator Ovie Omo-Agege, and the Minister of Niger Delta Affairs, Senator Godswill Akpabio, as reported by this column last Saturday, was provoked by the manner the members of the board of the Niger Delta Development Commission (NDDC) were picked.

An impeccable Presidency source told Sentry that contrary to popular belief, Senator Akpabio actually made an input into the appointment of the board members but was irked that the member he nominated was not made the chairman or managing director of the commission, hence his decision to constitute a three-man interim management committee to manage the board’s affairs.

As the story goes, President Muhammadu Buhari had told Senator Omo-Agege, who is said to be very close to the Villa, that he needed upright and competent people to run the affairs of NDDC because he believed that the huge sums hitherto pumped into the commission had not been well utilised by its managers. This was the basis upon which Buhari told some Niger Delta leaders who visited him in Aso Rock recently that a forensic audit would be carried out on the commission.

Omo-Agege, however, felt that it would not be fair for him to nominate the commission’s members without inputs from other Niger Delta leaders. He therefore contacted the National Chairman of the All Progressives Congress (APC), Comrade Adams Oshiomhole; former Bayelsa State governor, Chief Timipre Silver as well as Akpabio and some other Niger Delta leaders who nominated a name each. But it was Oshiomhole’s nominee, Dr. Pius Odubu, who became the commission’s new chairman, while Omo-Agege’s nominee, Bernard Okumagba, became the managing director.

Irked by the development, Akpabio constituted an interim management committee, even though he knew that the board would be cleared and there was even somebody already acting as MD. Few days ago, the House of Representatives ordered Akpabio’s interim management to quit because there is a board in place and the MD is part of it. Everybody is now awaiting President Buhari’s arrival from his trip abroad to inaugurate the new board.