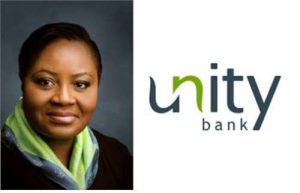 The association specially commended the Managing Director of Unity Bank, Mrs. Tomi Somefun for her leadership and doggedness in supporting the rice farmers through the Anchor Borrowers’ Programme, which is playing a critical role in Nigeria’s quest to attain self-sufficiency in rice production.

Speaking at the flag-off of wet season harvest and display of rice paddy pyramid in Gombe State on Thursday, the President of RIFAN, Alhaji Aminu Goronyo said the association was grateful to Unity Bank for always standing by the association to make sure they got all the support they need in taking advantage of the CBN-backed intervention programme.

On the strength of Unity Bank participation in the ABP, the Central Bank of Nigeria invited the Bank to the Zonal flag-off of sale of rice paddy and display of rice pyramid in Gombe State.

On her part, Mrs Somefun, in a message to the farmers at the event applauded the resilience of the rice farmers despite several challenges, especially insecurity and urged the beneficiaries of this season’s Intervention Programme to “take the Inputs and utilize it judiciously for the farming purpose which is aimed at actualizing the Federal Government’s goal of attaining food sufficiency, diversifying the economy away from oil, job creation for the teeming youth and poverty reduction”.

Represented by the Regional Manager, Abuja and North Central, Mr. Michael Akerele, Somefun also charged the rice farmers to demonstrate further commitment to the CBN’s intervention programme by repaying their loans promptly in order to ensure the sustainability of the Anchor Borrowers’ Programme.

She said, “We remain optimistic that RIFAN under the able leadership of the National President will continue to engage its members on their roles and responsibilities under the ABP.”

Somefun who went down memory lane to highlight the critical role the Bank has played in agric financing in Nigeria noted that since 2017 when the ABP started, the Bank has supported over 642,860 smallholder farmers across 35 states of the federation.

Specifically, on rice production, she added that the Bank’s strategic partnership with RIFAN in 2018 witnessed the financing of about 273,000 smallholder farmers across 33 states of the federation including the Federal Capital Territory, FCT, which was the largest single-ticket transaction for that year.

She further explained that in 2019, the Bank increased the tally by financing another 146,810 smallholder farmers for the wet and dry season farming across 35 States of the federation including the FCT.

“In 2020, additional funding was granted to finance additional 221,450 smallholder farmers of the association across the 32 states of the federation including the FCT for the wet season and additional 300,000 hectares will be financed in 16 states for 2020 dry season cropping season,” she stated.

Somefun also commended President Muhammadu Buhari and the CBN for their steadfastness with the programme despite myriads of challenges facing the country, especially with insecurity.

“Without a doubt, the country is faced with a myriad of issues particularly the security challenges which has affected the farming output and movement of food from the farm to table. However, this has not deterred the Federal Government from pursuing its goal of diversifying the economy. This is evident in the continuous support and funding to the agribusiness value chain that has proven to create massive employment for the teeming youths,” she said.

It will be recalled that Unity Bank in 2019 received presidential commendations and an Award of Recognition by ABP.