Shehu Sani speaks on Atiku’s plans to sell public companies, calls out his ‘accomplices’ in APC 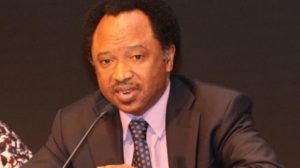 Shehu Sani, the Senator representing Kaduna Central has waded into the controversy on the plans by the presidential candidate of the Peoples Democratic Party, PDP Atiku Abubakar to sell off public companies.
Atiku had during an interview vowed to sell off 90% of the Nigerian National Petroleum Corporation (NNPC) corporation and privatize it if elected as President.

He explained that he will privatize parts of NNPC because it has been “beset by decades of mismanagement and is crucial to OPEC member’s economic fortunes.
Atiku has since then come under attack.

However, Sani, reacting, urged those criticising Atiku to also ‘throw mud at his accomplices in the ruling party.’

According to him, his accomplices are members of the All Progressives Congress, APC.
The Kaduna lawmaker wrote: “As you continue to throw mud on the ex-Vice President for his role in auctioning our public owned companies, don’t forget to throw some on ‘his accomplices’ who now occupy the comfortable seat of saints in the ruling party, in Nigeria’s prevailing priggish and sententious politics.”