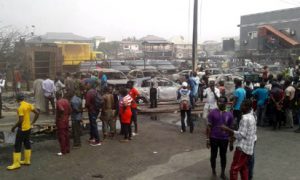 CALABAR – THREE Soldiers were allegedly among six persons burnt to death in Iwuru in Biase Local Government Area in central district of Cross River State on Wednesday night when a tanker laden with petroleum products crashed and exploded along the Calabar – Ikom highway. A fuel tanker laden with petrol fell and caught fire on the Festac Link Bridge in Awuwo Odofin LGA of Lagos State destrying some properties.

The incident which occurred seventy kilometres away from Calabar according to an eye witness who gave her name as Agnes happened when the taker developed break problem and the driver tried to maneuver it to a ditch to avoid collision with oncoming vehicles causing the tanker to upturn. The soldiers, according to Agnes were travelling in opposite direction when the accident occurred and they stopped their vehicle and rushed to rescue the driver and the conductor when the taker exploded into a bowl of fire and engulfed them.

“When the tanker fell into the gutter, smoke started coming out and the soldiers who were in a vehicle heading to Calabar quickly stopped their van and went to rescue the driver and the conductor but suddenly the taker burst into flames and they were caught in the fire” Agnes said She said three of the soldiers were trapped in the inferno while one managed to escape with severe burns and was rushed to the Akamkpa General Hospital for medical attention.

When Vanguard reporter visited the scene at about 9.00am on Thursday, the fire was still smoldering and the body of one of the soldier was seen lying face down while those of other two were some metres away and left with just bones. Capatain Owolabi, the Army Public Relations Officer for the Akim Brigade of the Nigerian Army in Calabar said he was yet to be briefed on the matter. “ I am not aware of any such incident. Let me confirm and get back to you soon”. He said