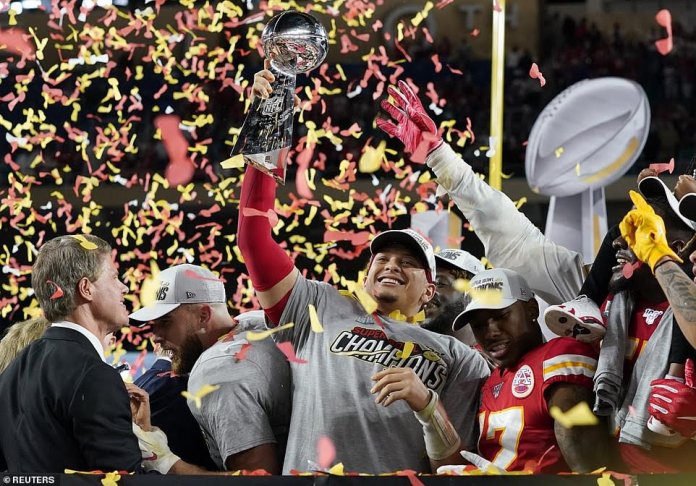 Patrick Mahomes produced a staggering fourth-quarter performance to guide Kansas City Chiefs to their first Super Bowl win in 50 years as they came from 10 points behind to stun the San Francisco 49ers in Miami.

Quarterback Mahomes, 24, had endured a difficult evening under the pounding pressure of the 49ers and looked set to miss out on the big prize.

But then, with his side 20-10 down heading into the fourth quarter, last year’s MVP found two superb throws on third down to continue a season of comebacks as the Chiefs scored 21 unanswered points in four minutes and 57 seconds to take home the Vince Lombardi Trophy.

Damien Williams’ second touchdown of the final quarter put the gloss on the scoreline as the Chiefs capped their wonderful late rally before celebrating a famous win in emotional scenes.

“We never lost faith. Everybody on this team, no one had their head down and we found a way to win in the end,” Mahomes, who was named Most Valuable Player, said in a TV interview as his team-mates celebrated under a cloud of confetti.

“The defence got some big stops for us and we found a way to win. Coach [Andy] Reid told me ‘keep firing, keep believing’ and he gave me a lot of confidence to go out there no matter what.

“The 49ers have an amazing defence, one of the best defences I’ve played against so far and I’m just glad our guys kept fighting. This team has heart, coach pushes us to be the best we can be. We did it baby!”

Throughout a forensic week of pre-match questioning, Mahomes had found himself under scrutiny like never before. After another season of brilliance, including no-look passes and a touchdown pass with his left hand, he found himself in the bizarre position of being compared with some of the all-time greats of the game while also being asked if he may choke on the biggest stage.

After three quarters of an excellent game those questions seemed reasonable enough – despite the superstar quarterback running in the game’s opening score.

Mahomes only threw five interceptions in the whole of the regular season but coughed up two in back-to-back drives as the incessant pressure from the 49ers defence took its toll and the team from the west coast looked set for a record-equalling sixth win.

The Chiefs were up against it, 20-10 down, but found resilience in the form of their star man and the fact that they had already won twice on this post-season run after being at least 10 behind.

At 3rd & 15 on their own 35-yard line, Mahomes evaded a tackle and launched a 44-yard bomb downfield to find Tyreek Hill and start the ball rolling.

That turned into a touchdown for Travis Kelce – after another huge throw on third down from Mahomes – to cut the deficit to three.

After the 49ers were shut out in response, Mahomes found Williams for a score which had to be reviewed, but was given to put the Chiefs ahead.

Williams then sprinted in for a second as the 49ers crumbled to cap a memorable win.

Richard Nixon was in the White House, Diana Ross was still in the Supremes and Paul McCartney hadn’t quit the Beatles last time the Chiefs won the Super Bowl.

And McCartney was among the galaxy of stars in the house to see that run come to an end in Miami on a superb Sunday night.

The 49ers coach Kyle Shanahan was a ballboy at this very stadium when San Francisco won their fifth Super Bowl trophy back in 1995.

His father Mike was on the coaching staff, and went on to win two Super Bowls as a head coach with the Denver Broncos.

His son seemed set to join him after a fine defensive display and a neat performance at quarterback from Jimmy Garoppolo.

Touchdowns from Kyle Juszczyk and Raheem Mostert looked like sending the 49ers home with the trophy once again, but Mahomes’ MVP-winning final 15 minutes knocked the stuffing out of them.

It was to be big night deja vu for Shanahan, who was offensive co-ordinator at Super Bowl 51 when his Atlanta Falcons blew a 28-3 lead to lose to Tom Brady’s New England Patriots.

“It was a tough loss and it hurts everybody in that room losing,” said Shanahan. “We had opportunities to win and came up short. They were better than us today, we can deal with that but we’re obviously disappointed.

“I felt real good at 10-10 at half time, especially with us having the ball for the start of the second half.

“Kansas can score very fast, they are hot and cold, that’s how that team is.

“They’re just hurting, the guys put it all out there. Guys put their heart into the season and came up one game short.”

This was a Super Bowl that delivered during half-time as well.

After last year’s Maroon 5 performance failed to inspire, the organisers had turned to Shakira and Jennifer Lopez to deliver an all-female co-headline show.

The pair had promised more songs than ever before during their 12 minutes in the spotlight, and rattled through around 20 hits between them.

The show also incorporated a tribute to basketball legend Kobe Bryant, who died alongside his daughter and seven others in a helicopter crash last weekend.

As Lopez’s daughter performed the opening bars of Let’s Get Loud, a giant cross illuminated the field of Miami’s Hard Rock stadium in yellow and purple, the colours of Bryant’s team, the Los Angeles Lakers.