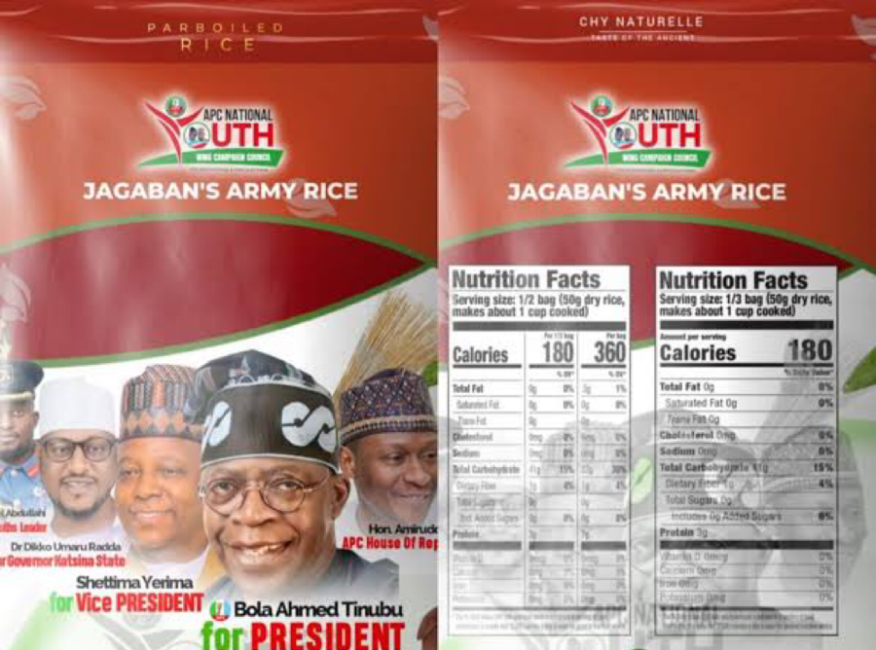 Specially branded rice with embossed pictures of the presidential candidate of the ruling All Progressives Congress, APC, Bola Tinubu, has resurfaced

Prior to the conduct of the party’s presidential primary election in June, Tinubu began to distribute branded rice in Kano and some northern states, promising to distribute such across the country.

Finding showed that he however did not honour his promise after winning the ticket of his party during the June primary.

Few days ago, a special campaign package containing 70g of noodles, t-shirts, caps, 90ml of vegetable oil among other branded campaign items began to be distributed and trended online to the consternation of many Nigerians.

The APC said the items were examples of what the Tinubu administration would do if he wins the February presidential election.

He said the rice distribution would commence the same day the youth under him would commence a street to street campaign for Tinubu on an operation to deliver your street.

“SATURDAY IS DELIVER YOUR STREET DAY 1! Calling on all progressives to prepare to go out on Saturday and engage their neighbours, volunteer in their community,” he wrote in a message shared on Twitter.

He advised participants to “create your own street activity and implement to mobilise in your community.”

On the rice he said, “Jagaban Army rice now available in Katsina for distribution this saturday during the Deliver your street day.

“[It] should get to more states soon.

“Our youth leaders in the grassroot and our youth stakeholders are working tirelessly to mobilise, led by the Wing Commander,” he said.

In April 2022, Tinubu distributed bags of rice in Nasarawa and some part of the North weeks before the conduct of his party’s presidential primary election, saying “This gesture is to provide succour to the people especially the less privileged in Nasarawa State.

“I want to also use this opportunity to call on all Nigerians to scout out for competent leaders ahead of next year’s general elections so as to curb the socio-economic challenges undermining the development of the country.

“So, I am soliciting the support of the APC members and all Nigerians to enable me to succeed in my presidential ambition.

“The 3,000 bags of rice allocated to Nasarawa State would be distributed to socio-cultural organisations, religious bodies, professional groups, and APC party stalwarts,” Tinubu had said.