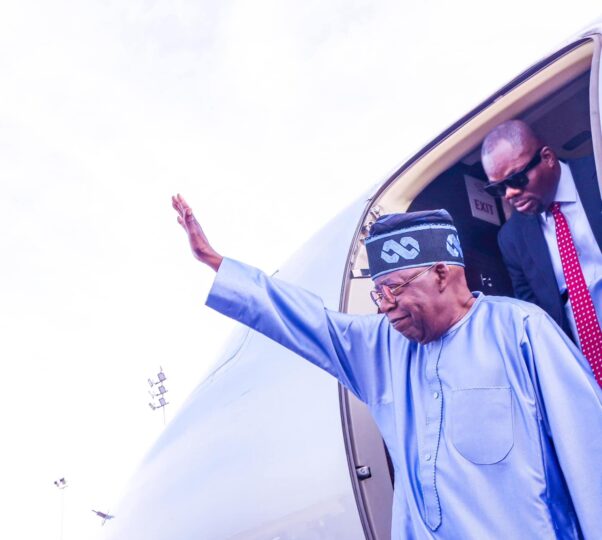 Bola Tinubu, the APC presidential candidate for 2023 election, arrive in Jos, the capital of Plateau State for the kick off of his campaign

Gov. Inuwa Yahaya of Gombe State has said Asiwaju Bola Tinubu, All Progressives Congress (APC) presidential candidate, won’t disappoint Nigerians, if elected as president, because he has capacity to deliver.

Yahaya stated this when he paid a visit to the palace of Alhaji Abdulkadir Abdulsalam, the Lamido Gona, in Amada community of Akko Local Government Area (LGA) of the state.

He said that President Muhammadu Buhari performed credibly well in terms of delivering good governance to the people of Nigeria.

“We need consolidation, that’s why we are going to vote for Tinubu. Tinubu has promised to continue with the good works of Buhari by ensuring good governance to the good people.

“I assure you he will not disappoint,” he said.

Yahaya said his visit was to thank the community for its support to his administration as well as to seek for its prayers before proceeding to various wards for campaign.

He urged the people of the emirate to vote for APC candidates in the 2023 general election.

Also speaking at Garko ward in Akko LGA, the governor appealed to supporters to go and collect their Permanent Voter Cards (PVCs) and vote APC candidates from top to bottom.

He said that the APC remained the only party that was concerned about the wellbeing of the people and urged the electorate to vote for the APC to ensure that their interests were well protected in 2023.

He expressed confidence that with the introduction of Bimodal Voter Authentication System (BVAS) only politicians with supporters could win election adding that there was no more room for electoral fraud.

“We are confident with the introduction of BVAS that Tinubu and all APC candidates will win in 2023 because we have performed well and we have supporters,” he said.

Speaking earlier, the State Director-General, APC Campaign Council, Mr Zubair Umar appealed to supporters to collect their PVCs ahead of the 2023 general election to exercise their franchise.

Umar also called on youths to engage in peaceful politics and eschew violence.

He said that Yahaya needed no campaign for re-elected because his administration had performed beyond expectations in all sectors.

The News Agency of Nigeria(NAN) reports that thousands of defectors from oppositions parties were received by Yahaya in the three wards visited in Akko LGA.