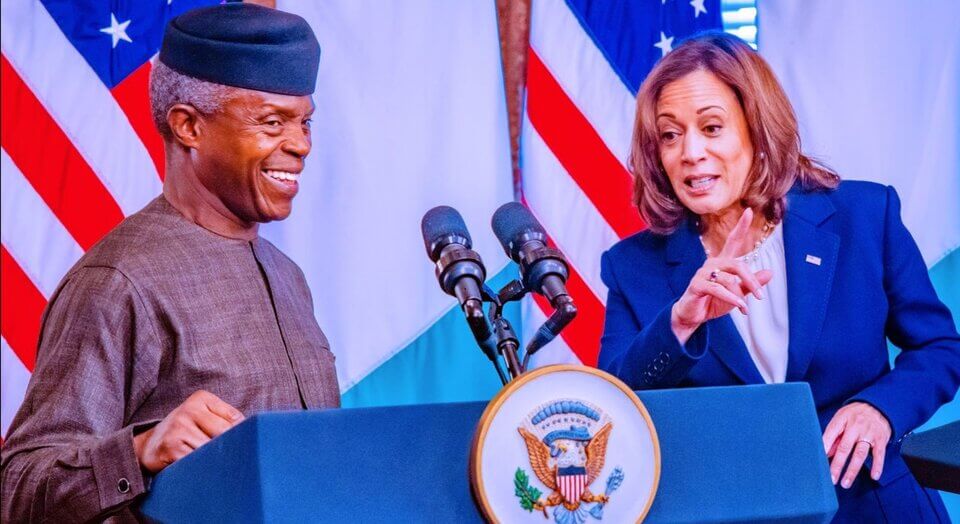 – As U.S. Pledges $627 Million In Bilateral Assistance To Nigeria

Harris made the commendation while hosting the Nigerian Vice President and members of the country’s Energy Transition Implementation Working Group (ETWG) led by him at the White House on Friday.

“When we look at the issue of the climate crisis, Mr. Vice President (Yemi Osinbajo), you have been an extraordinary leader on this issue. And I know this is something that you feel very strongly about, and you’ve been very adamant about the role Nigeria can play in addressing this crisis that faces us all,” Harris told her guests in Washington DC.

The U.S. VP lauded Osinbajo and his team for drawing up the recently launched Nigeria Energy Transition Plan which contains the country’s pathway to achieving net-zero emissions by 2060.

“I know (the plan) pledges carbon-neutral energy by 2060. Ambitious goals, but important goals. And under your leadership, I have no question that they will be achieved.

“Today, we will also discuss the urgent issue that affects the continent of Africa and the world, which is the issue of food insecurity. As you know, the United States has committed $7 billion in food security and humanitarian assistance to African countries over the past year alone,” she said.

A statement issued after the meeting by the White House said Harris assured Osinbajo of the commitment of the American Government to Nigeria’s energy access.

“In line with the Biden-Harris Administration’s U.S. Strategy Toward Sub-Saharan Africa, the two leaders committed to working closely to support Nigeria’s energy access and energy security goals, as well as our shared global climate goals,” it said.

During the launch of Nigeria’s Energy Transition Plan in August, Osinbajo had stated that Nigeria would need $410 billion (about $10 billion annually) to deliver the plan by 2060.

“For Africa, the problem of energy poverty is as important as our climate ambitions. Energy use is crucial for almost every conceivable aspect of development. Wealth, health, nutrition, water, infrastructure, education, and life expectancy are significantly related to the consumption of energy per capita,” the Nigerian VP had said.

“Vice President Harris noted the importance of strengthening public trust in law enforcement institutions and highlighted the Biden-Harris Administration’s commitment to support police reform. To that end, she informed Vice President Osinbajo that the Biden-Harris Administration will commit an additional $5 million to support police and criminal justice reform in Nigeria. The two leaders also discussed the deteriorating security environment in the Sahel and agreed to continue to work together to address terrorism in the region.

“In support of the United States’ strong bilateral relationship with Nigeria, Vice President Harris shared that the Administration intends to commit up to $627 million in bilateral assistance over the coming year, subject to congressional approval,” said the statement.