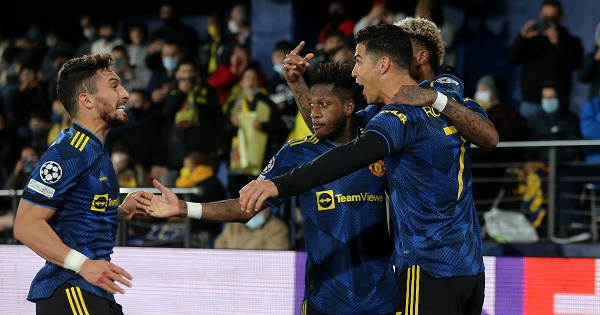 Manchester United moved into the Champions League last 16 thanks to two late goals against Villarreal in Michael Carrick’s first game as caretaker manager.

Cristiano Ronaldo maintained his record of scoring in every game in this season’s competition when he lifted the ball over goalkeeper Geronimo Rulli in the 78th  minute, after Fred had dispossessed Etienne Capoue.

Jadon Sancho then sealed the victory in injury-time when he blasted a shot that went in off the underside of the crossbar.

United, who sacked Ole Gunnar Solskjaer on Sunday, are top of Group F with one round of matches left.

However, they were indebted to goalkeeper David de Gea, who produced two superb one-handed saves, one in each half, to keep out well-struck efforts from Manu Trigueros when it was goalless.

Meanwhile, Manchester United have reportedly spoken to Ernesto Valverde over him becoming their interim manager.

The 57-year-old, who won LaLiga twice and a Copa del Rey in his two-and-a-half year spell at Barcelona, has been out of work since leaving the Camp Nou in the summer of 2020.

The Guardian reports that Valverde has held talks with Man United’s football director John Murtough about taking over on a temporary basis.

The report adds the Red Devils top brass are conscious that Valverde has worked with Lionel Messi and would thus be at ease managing Cristiano Ronaldo.

It’s understood Valverde has started sounding out potential players he could add to strengthen the squad should he be appointed.